From the website of the Institute for the Translation of Hebrew Literature, this short article provides basic biographical information about Moshe Smilansky (1874-1953), a pioneer of the First Aliyah and a cultural Zionist leader who moved to the Land of Israel in 1890 from the Ukraine to work in agriculture and settle the land. A founder of the Jewish Farmer’s Association and an advocate of peaceful coexistence with the local Arabs, Smilansky was active during the 1920s and 1930s in the acquisition of land, especially in the Negev. Moshav Nir Moshe in the Negev was named after Smilansky. A prolific Hebrew author, Smilansky wrote both fiction and non-fiction works depicting the life of the Arab and Jewish communities in this period in the Land of Israel. 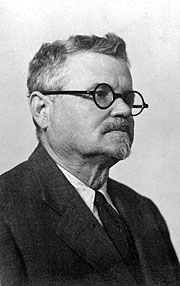 Photo credit: The featured picture of the sign at the entrance to Kibbutz Nir Moshe was taken by Ariel Palmon. CC BY-SA 3.0.

Thank you for rating!

In order to save / upload posts or view saved content, you must register / log-in to your account